An unexpected but welcome offer was made to us by a local Beckenham chef and caterer Maria Abrahams to cook a delectable range of British fusion cuisine to be served in the interval of our concert at St Barnabas, Beckenham called British Choral Classics

Wine will be served to compliment the treats made by our bespoke caterer.
Posted by London Lyric Opera at 08:25 No comments:

This is our first try with an online ticket seller but thought we should move with the times. Please click on the banner below to purchase tickets for our next concert at St Barnabas Beckenham 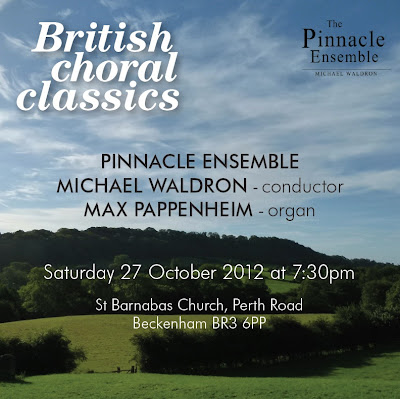 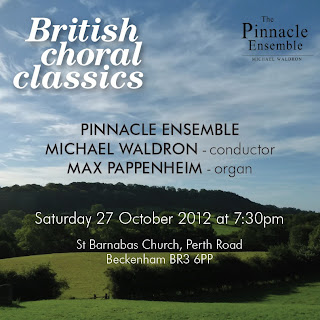 This special performance of choral music celebrating 450 years of British composers will include works by Weelkes, Purcell, Harris, Stanford and Holst amongst others who have left an indelible mark on the musical life of London. London Lyric Opera and the Pinnacle Ensemble look forward to their first collaboration. Stunning music sung by an ensemble of exceptional singers with Max Pappenheim, Organ. Experience the sounds of the British choral tradition at St Barnabas Church, Beckenham.

Tickets from: tickets@pinnacle-ensemble.com or at the door. Book early to avoid disappointment. This will be a very popular concert.
Posted by London Lyric Opera at 06:56 No comments: 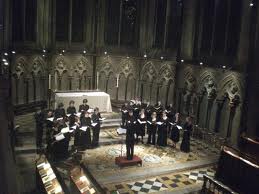 Attached is the link to listen to this gem of a choir created by our newly appointed Musical Director, Michael Waldron

Listen to the Pinnacle Ensemble

This is a taster for the quality of singing you can expect from this choir of virtuoso singers. Michaelwill lead our first concert of the 2012/2013 season in a celebration of 400 years of English Choral Music with the Pinnacle Ensemble at St Barnabas Church in Beckenham, Kent on the Saturday 27th October at 7.30pm.
Posted by London Lyric Opera at 13:19 No comments: 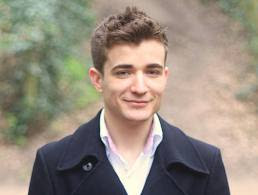 We are delighted to announce the appointment of Michael Waldron as the Musical Director of London Lyric Opera. Michael brings a wealth of choral and orchestral experience which will be crucial to the success of future LLO events.

Michael is the founder and conductor of the critically acclaimed Pinnacle Ensemble and will lead our first concert of the 2012/2013 season in a celebration of 400 years of English Choral Music with the Pinnacle Ensemble at St Barnabas Church in Beckenham, Kent on the Saturday 27th October at 7.30pm.

We have some exciting plans for the rest of the season which will be announced shortly.
Posted by London Lyric Opera at 13:09 No comments:

Sorry for the long delay getting the site back. Our previous ISP was DNbuy.com who seemed to think that an email is something you ignore. What began as a simple matter of an expired card number turned into a saga which has gone on for 6 weeks. DNBuy Inc are the resellers ( I know I had never heard of this before either) for Enom. Thankfully enom.com were able to help me out and now LLO has migrated to an UK provider.My last word on DNBuy is DON'T!! Keep shopping around. No excuse for such poor customer service. Enom were terrific.

The downside of this is the galleries which we had stored in the former LLO site which have now gone. The current page is a simple wordpress layout which is still being built so please understand if it takes a while to create
Posted by London Lyric Opera at 02:52 No comments:

The LLO site is down for the moment.

Posted by London Lyric Opera at 02:15 No comments:

In February 2009 London Lyric Opera mounted an ambitious concert performance of Beethoven's, Fidelio at the Cadogan Hall. Elizabeth Connell was an early adviser and supporter when I established the company and to my delight and amazement said that she would love to sing Leonora again.

Conducted by Madeleine Lovell and with the support of the Royal Philharmonic Orchestra, Philharmonia Chorus and Queens College Chapel Choir and soloists including Jeffrey Lloyd-Roberts, Andrew Staples, Sarah Nicholls, Richard Wiegold and myself the evening was one of the highlights for the company.

Singing to a sold out Cadogan Hall the concert was an undoubted success. From the very beginning she was ever helpful even to the point of suggesting we use the dialogue version that she had perrformed in Hamburg in the 70's which she offered to us at an early meeting. Her advice and encouragement during our piano rehearsals will never be forgotten by the cast. From beginning to end Miss Connell was the perfect colleague.

Last week Elizabeth Connell passed away after a long and brave battle with cancer. I, like many of her friends, colleagues and fans, was terribly saddened by her death. Her voice was unique. For a singer of the 'big' roles by Verdi and Wagner it was always a revelation to hear her sing again as the voice never lost its youthful brilliance or delicacy yet had an incredible ability to cut through the largest of orchestras with a blade of tone that too was always beautiful and impeccably controlled.

I last saw her at a Tait Memorial Trust concert at 49 Queen's Gate Terrace in December 2011. As ever we had a good chat and the inevitable, "What are you planning James?" came up. I told her that Tosca was being seriously considered. We had a conductor, orchestra but just needed to cast it oh plus little things like a venue, funding, artwork. I almost fell off my chair when she said that Tosca was one of her favourite roles but she had not yet had the opportunity to sing it. "James, I would love to sing Tosca with you..." Christmas, New Year, Kids back to school etc filled the coming months. I was about to call her about the time her brother Paul posted his message on facebook announcing that she was 'gravely ill'. She was gone a few days later.

Now hearing her singing 'Vissi d'arte' that would have been something...

Tomorrow a requiem mass will given for her. May god bless and keep her and if possible let her know how her wonderful bubbly and ever joyful personality is missed by so many people all over the world.

A tribute site has been created by her friend and agent, Helmut Fischer

http://www.elizabeth-connell.co.uk/
Posted by London Lyric Opera at 12:13 No comments: