Yesterday I had a long chat with Alison Karlin, Founder of the UK's newest concert search engine/resource Bachtrach.com subsequently I registered LLO and entered the concert details for Die Fledermaus here. Terrific site as it gives so much detailed information about the concerts and provides us with another way to find our audience. We wish them well.
Posted by London Lyric Opera at 03:28 No comments: 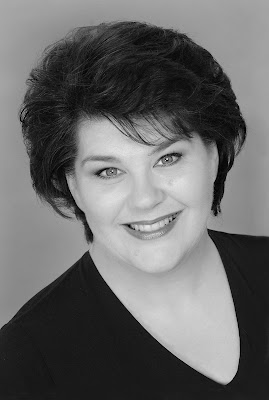 Earlier this year the opera world lost one of its brightest stars, the inspirational Australian Soprano, Deborah Riedel passed away in January after a 10 year battle with Cancer. The news hit all singers in Australia and many overseas very hard as few people knew that she was so ill. I first met her in the mid 80's when she gave a concert in Melbourne with other members of the Australian Opera ( Opera Australia today) Chorus at the Wesley Church in Melbourne. Donald Solomon, an old friend of my parents introduced us all to her. From that moment on I was an admirer of her work and was captivated by her lovely, warm nature. Here I was not alone. She was truly universally loved...an example to us all.

Years later she returned to Melbourne to sing Leila in the Pearlfishers and later had a triumph as Marguerite in Ian Judge's brilliant production of Faust both staged by the Victoria State Opera and conducted by Richard Divall. Like many of my contemporaries I rated Deborah Riedel as one of the great singers of her generation. When I first heard her she had a beautiful warm Mezzo-Soprano voice. Later she made the change into a full lyric Soprano and so began a major International career.

She enjoyed the support of Dame Joan Sutherland and Richard Bonynge who conducted many of her greatest triumphs some during her courageous 10 year battle with cancer. Her loss at such a young age is so cruel for many reasons. Some of her greatest work especially her Sieglinde in the State Opera of South Australia's historic Ring Cycle (note: Her Siegmund was the Tenor, Stuart Skelton currently singing Peter Grimes for ENO) was during this time.

LLO began this tradition when I dedicated LLO's concert performance of The flying Dutchman at the Barbican to my late father, Eric Hancock and followed this by dedicating Fidelio to a dear German lady, opera lover and supporter, Edith Kraus. I wrote an email to the cast asking them for suggestions and her old friend and colleague Jeffrey Black (Frank in Die Fledermaus) wrote back suggesting Deborah Riedel. Dedicating these performances is a small gesture but we hope it will offer comfort to her husband the tenor, Paul Ferris (who will be attending one of the performances) and also encourage members of our audience to give to one of the charities that we support, Marie Curie Cancer Care whose work is so important.

Obituaries:
A Statement by Richard Bonynge from the Opera Australia website
The Independent
The Times
The Australian
Open publication - Free publishing - More soprano
Posted by London Lyric Opera at 05:59 No comments:

Haydn's, The Creation at Cadogan Hall 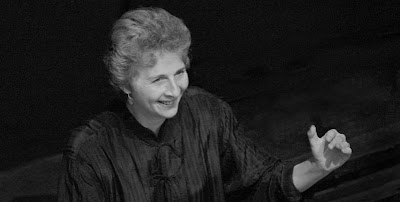 Last night I had the pleasure of hearing the London Mozart Player's performance of Haydn's, The Creation at Cadogan Hall. Soloists were Carolyn Sampson, who jumped in for an indisposed Joan Rogers; Andrew Staples, Tenor and Iain Patterson, Bass. The Vasari Singers, a London chamber choir that I was unfamiliar with, were wonderful.

The performance was conducted with vigour and an incredible energy by Jane Glover. I enjoyed it immensely, it was an outstanding performance of this great work by 'Papa' Haydn. Andrew Staples, our Jaquino in Fidelio, sang with ease and glorious purity of tone. Iain Patterson was incredible. I can see why his career is so meteoric. He coloured every line and had the most beautiful sound in every part of his seamless voice. Carolyn Sampson complimented this strong line-up with elan and grace. When I started writing this a review was furthest from my mind but a wish to share my sadness with the attendance. I heard that it was somewhere in the region of 350, less than half of the capacity of Cadogan Hall. The concert game is a risky one but a concert with such strong constitiuent parts deserved a much larger audience.

This is the lot of a concert promoter/ orchestra or choir giving a concert. Trying to reach your prospective audience is hard enough...a science in itself ...but then converting that into a ticket sale is another matter entirely. 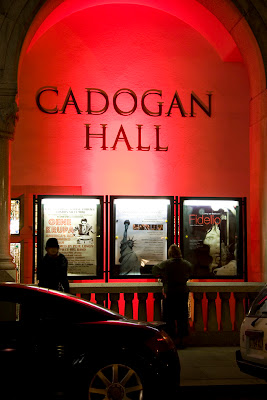 Cadogan Hall,as you can imagine, is one of my favourite venues in London. The location is priceless and convenient to one of the nicest parts of London. The acoustic is superb, the seats are very comfortable and the overall feel of the venue is one of comfort and style. As I am discovering there is no textbook which explains concert attendance. How often do you go to a well attended concert and the standard is poor, the artists are below par? The logic should be that the great concerts should have full houses. Sadly this isn't the case. No great mystery there as one of the joys of live performance is that you never know what is going to happen. Is the soprano going to soar effortlessly? Is the tenor going to crack? etc so when all of the elements are right well...it is magical. Maybe one day Apple will invent an app that will point us in the right direction. If they did I wouldn't want one. Where is the fun in that?

I wish London Mozart Player's well in their 60th anniversary year. The next 60 years look very sound if Friday's concert is an example. Bravo.
Posted by London Lyric Opera at 13:54 No comments:

Posted by London Lyric Opera at 09:38 No comments:

Trying to keep pace with the technology on offer is fast becoming a regular preoccupation. To date we are on Facebook , Twitter, InstantEncore the regular concert listings on concert-diary.com plus the LLO website and this blog. Yesterday I registered LLO on issuu.com so we could publish all of our artwork, flyers and posters. It will even come in handy as a way to publish press releases. The intricacies of the site are still way beyond me but thanks to an easy to use interface I hope to use it alot. Last but not least is LLO's own channel on Youtube.com Early days as I have only uploaded one short film with Madeleine Lovell but keep coming back as it too is an incredibly handy way for us to spread the word. Over the next couple of weeks I intend to post short interviews with the cast and with Leslie Howard
Posted by London Lyric Opera at 03:35 No comments:

Madeleine Lovell, conductor for Die Fledermaus introduces LLO's coming concert performances at Cadogan Hall. We had a valuable day meeting Gill Dixon, Events Manager at Cadogan Hall and a brief meeting with James Tapping their Technical Director to discuss our requirements for Die Fledermaus. Thanks to Cadogan Hall's state of the art lighting rig we have a myriad of options available to us to enhance the look of the evening. With 68 singers in the Philharmonia Chorus and 46 in the Royal Philharmonic Orchestra we have to be sure of our planning to ensure we maximise the performance space but avoid singers 'bumping' into the orchestra. As you can imagine space will be at a premium. The concert Steinway grand has to be moved centre stage after the first act...this is the easy part...getting it off in a 'unobtrusive' way will be fun. 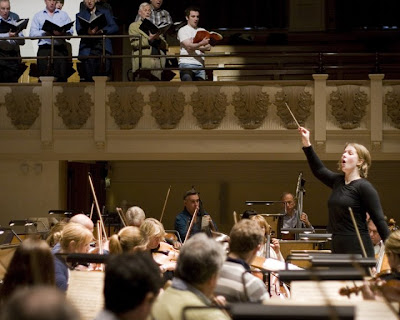 Afterwards a very helpful time was spent planning the entrances and exits plus props and the many other requirements. A very enjoyable day with a constant stream of ideas coming from Bernard and a couple of very silly ones thrown in for good measure.

Music calls have begun. Madeleine is personally coaching the cast before rehearsals begin. This was a tradition started by Lionel Friend when he prepared The flying Dutchman cast months before.
Posted by London Lyric Opera at 11:02 No comments: 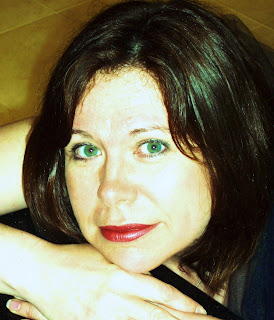 Lovely English soprano, Debra Morley will be singing the role of Ida. Her experience with many of the UK's finest companies covers most of the lyric coloratura repertoire. Miss Morley will compliment our already strong cast. More details soon.

Tomorrow will be a busy day. A production meeting with Madeleine Lovell and Bernard Horsfall after an inspection of the stage at Cadogan Hall. With the flyer ready now and about to be printed we have alot of work ahead of us to get the word out about our performances. Press release will be issued shortly.

Our beautiful flyer is here.. Die Fledermaus at Cadogan Hall

Delighted to share the flyer for Die Fledermaus with you all.
Illustration by Amelie Hegardt/Darling Management and designed by the talented Orla McAvinue at Wardour

Posted by London Lyric Opera at 13:01 No comments:

Jeffrey Black is singing Frank for LLO in our upcoming performances of Die Fledermaus at Cadogan Hall. After a major international career as a lyric baritone he decided to take two years off to focus on the dramatic Verdi baritone repertory. After we engaged him as the Inspector, Frank he was booked by Chelsea Opera Group to sing the title role in Simon Boccanegra with them on June 7th. A few weeks later and he has been booked to understudy Falstaff at Glyndebourne in the current production. We are looking forward to working with this very highly sort after baritone in Fledermaus at Cadogan Hall, Tuesday June 16th and Friday June 19th 2009.
Posted by London Lyric Opera at 06:17 No comments: