A few words about the beautiful illustrations... 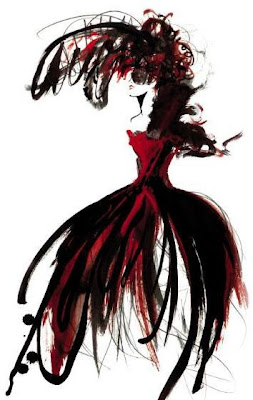 Wardour became our design and branding partner in May 2008. From our first production at Leighton House we have commissioned an illustration for every production. The process starts with a brief to Wardour which pretty much sums up what the opera/ concert is about, what look we are after, period, feel etc. Lisa Cromer, Wardour's Design Director has unenviable task of trying to make sense of my musings and thoughts and somehow offer me with drawings that are exactly what I was after all along but didn't really know how to say it...see what I mean. Lisa sends me samples of work by illustrator's she believes compliment the work we are doing. The striking work of
Amelie Hegardt/ Darling Management jumped out at us. Die Fledermaus epitomises fun and style. A comedy of manners and a light-hearted poke at infidelity and the seven year itch. Rosalinde is one of Opera's most glamorous characters and we believe that Amelies gorgeous illustration has captured this idea with her glamourous illustration of this beautiful woman.

The next stage is the Flyer and Poster. A good example is the illustration we had for our first concert, Passion of Puccini at Leighton House. The illustrator here was Noumeda Carbone which set the bar very high for all future concerts. The brief was to combine the three heroines from the opera's we were presenting in excerpts. La Boheme (Mimi), Tosca and Madam Butterfly. The result was an image which was a major factor in helping LLO find and attract our audience and was the reason we decided to stick with the concept of strong illustrations for every concert.

...and Sam Weber's illustration for Fidelio. Interestingly enough Cadogan Hall's marketing people were so taken by the design they happily had this poster in the most prominent position, next to the box office, for over a month. From Sloane Square tube it just looked fantastic.

...then the final stage is the Programme which Wardour, to date, have taken the illustration and used elements of it throughout the programme on each and every page in the most imaginative and amazing ways eg Cycles was our next concert at Cadogan Hall, the brief asked for lush and vibrant colours with a strong floral influence plus references to the songs ( it was a concert of orchestral song cycles) and the poetry we were presenting. The illustration was by Izumi Nogawa. The programme was B5 and was a very impressive 44 pages including cover.

If you have a minute scroll through the programme (there are more on the issuu site on the side bar on the left of an enlarged page) and be, as I was at he time, amazed at the inventiveness and sheer style of the designers at Wardour.

Open publication - Free publishing - More cadogan hall
The flying Dutchman was next in November 2008. This was the major concert of our year and Evelina Frescura didn't let us down with this striking and evocative illustration. Dutchman is one of Wagner's early operas but is on the cusp of his mature works which are famous for the power and intensity of the plots, music and characters. I don't know how she did it but somehow a 'simple' drawing of a ship told a story and created a mood that enhanced the concert we were about to perform. The articles within the programme are wonderful. Page 16 & 17 is a brilliant piece by Germaine Greer. I know for a fact that the Wardour team loved this spread.