Die Fledermaus - Was it really over a week ago? 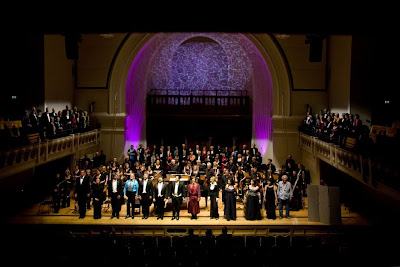 Producing a concert at this level is never easy and you are never certain how it will all turn out. So many elements to be considered ie Singers, Orchestra, Chorus, Movement, Artwork etc. Our recent Die Fledermaus was a major jump for us; not one but two performances plus the addition of a world famous concert pianist for good measure. I am happy to say that Die Fledermaus was one of LLO's greatest successes and provided a fitting end to our first season. 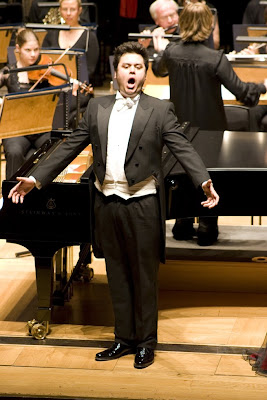 "Charne Rochford, as Eisenstein, showed a special gift for comic roles: he has a huge talent for physical comedy, creating an expressive, hilarious and appropriately ridiculous portrait of the character." Seen and Heard. Margarita Mota-Bull


The performance was a great success on so many levels. The Royal Philharmonic Orchestra played beautifully. This is the RPO's third opera with us and each time they astound me with their dedication to the score and commitment to the performance. I don't believe that we would have reached such artistic heights without them. The scoring requires outstanding playing from all sections: 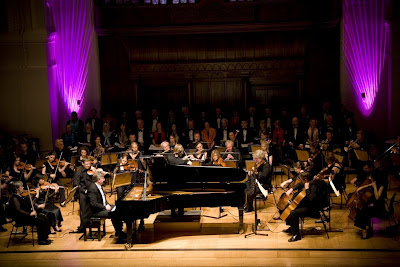 "The real stars of the night though, were not the solo singers but Strauss’s music and the Royal Philharmonic Orchestra, who delivered an excellent performance, under Madeleine Lovell's baton."
Seen and Heard, Margarida Mota-Bull 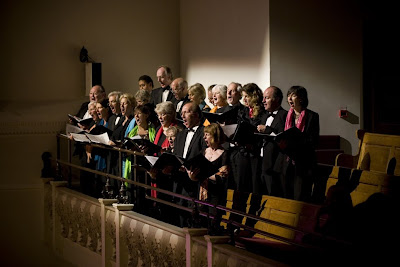 "The Philharmonia Chorus did full justice to the music too, giving a solid, excellent rendition of their powerful pieces during Act II, as various guests and servants at Prince Orlofsky's party." Seen and Heard, Margarida Mota-Bull 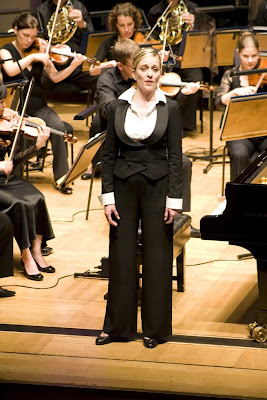 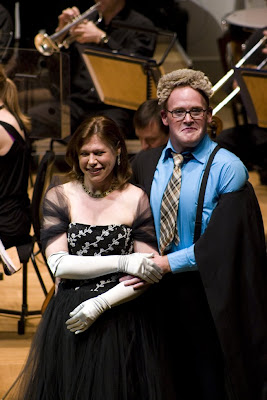 "and of course Nicky Spence extracted every inch as the muddlesome lawyer."
Serena Fenwick, Musical Pointers 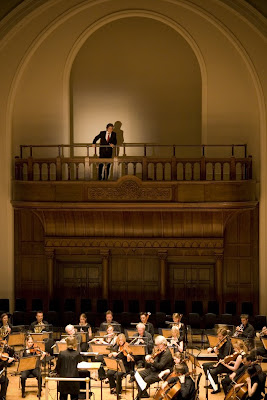 "Garrie Davislim was the attractively sung and personable Alfred, and he managed to convey that slight disdain of an opera tenor slumming it in operetta. " Peter Reed, classicalsource.com 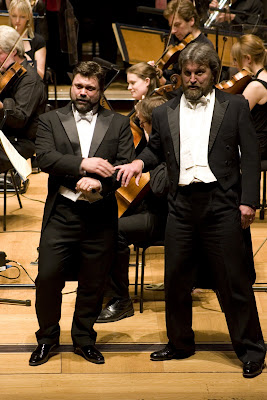 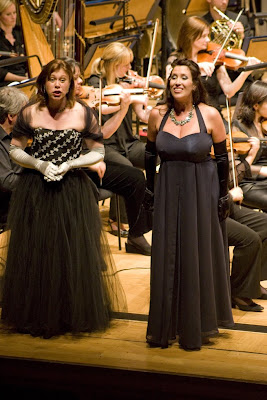 Pictured above are Debra Morley and Ana James. Debra gave a wonderfully rich account of Adele's sister, Ida. I hope that she will work with us again as she truly gave this relatively small role life and was an asset in every scene she was in. Oh and her top notes are stunning and sounded superb in the big finales.

"Ms James delivered possibly the outstanding performance of the evening. She was a member of the Royal Opera's Jette Parker Young Artist Programme and its influence showed throughout. She gave an accomplished, dramatically expressive performance, playing a sassy, very funny Adele, with some superb singing, especially in her final big moment, during Act III."
Seen and Heard, Margarida Mota-Bull 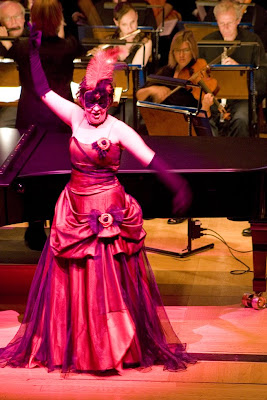 "Sarah Redgwick’s warm lyric soprano had the poise, good taste and understated humour of the role; her looks were a bit too English and wholesome for her to be entirely convincing as the mysterious Hungarian countess, but when she sang it was another matter, with the ‘czardas’ agreeably insinuating and instinctive." Peter Reed, classicalsource.com

Leslie Howard played with the grace and style of a great virtuoso. His performance of the Liszt, Hungarian Fantasies was mesmerising. The change of mood was accepted readily by the audience who all sat back and watched and listened to one of the worlds great Lisztians playing a devilishly difficult piece for piano and orchestra. He was a revelation to us all. The reviewers all agree with me on this point: 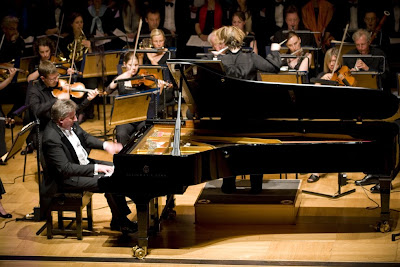 "The mystery guest was not a star singer but a star pianist, Leslie Howard, who continued the Hungarian tendency with a performance with the Royal Philharmonic Orchestra of Liszt’s Hungarian Fantasy, very much in the heavily melancholic ‘rhapsody’ style and thrillingly played by this great Liszt virtuoso. It sat rather oddly within the context of champagne and decadence, but who cares? It’s a terrific piece." Peter Reed, classicalsource.com

"Act II traditionally includes a guest celebrity making a cabaret appearance. On this occasion Liszt specialist pianist, Leslie Howard, gave a rare performance of the Fantasie uber ungarische Volksmelodien, one of the few works that Liszt composed for piano and orchestra, which raised the loudest applause of the evening." Serena Fenwick, Musical Pointers

We were terribly lucky to find Bernard Horsfall to play Frosch, the gaoler. Bernard has a rich pedigree acting with the RSC, Dr Who, James Bond etc He agreed to be our dialogue coach, in hindsight this was one of the most important decisions we made. He came to every rehearsal and took detailed notes which he methodically passed on to the cast. His influence was vital to the dramatic integrity we were seeking and ensured that the dialogue reached the same level as the music. 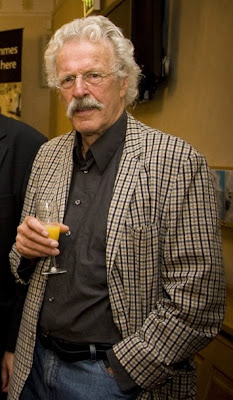 "The speaking part of Frosch, the gaoler, was wonderfully played by Bernard Horsfall; his appearance though brief was unforgettable."
Seen and Heard, Margarida Mota-Bull

Last but not least I must mention our conductor Madeleine Lovell. This was really her baby. Her fingerprint could be found in every element of the evening. It was a pleasure to develop this project with her.

"She is a young, graceful and exciting conductor who led the orchestra and the chorus into an intelligent, expressive and elegant rendition of this popular work. Ms Lovell had an intuitive understanding of Strauss’s witty score and ensured that the music made its full impact on a delighted audience. "
Seen and Heard, Margarida Mota-Bull 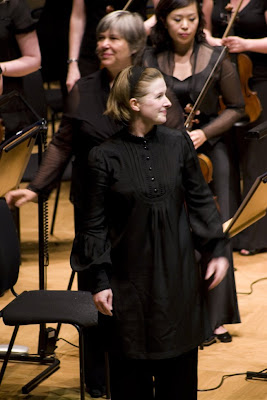 "Madeline Lovell, who was highly praised for her “Fidelio” with LLO earlier this year, conducted superbly, with her fresh, springy and spontaneous approach to the Overture energising the whole evening with an instinctively light Viennese lilt that was very engaging." Peter Reed, classicalsource.com 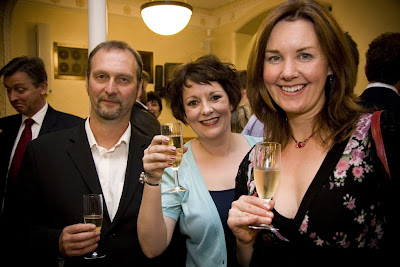 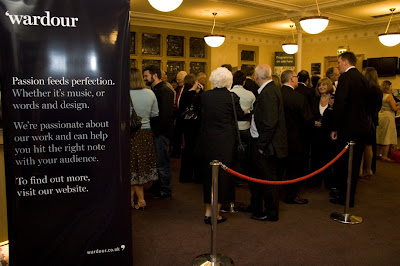 Reviews to date courtesy of www.theoperacritic.com

Posted by London Lyric Opera at 13:27